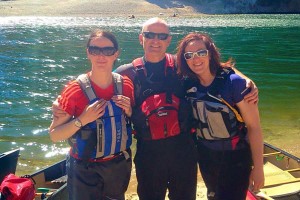 On 30th March we set off for Dublin airport and our onward trip to Lyon airport. Following delays consisting of headwinds and faults with aircraft, we eventually landed in Lyon for a 3hour drive south to the Ardeche gorge. This drive was a tad scary, our pilot Alan had problems with curbs. Marion and I screamed and closed our eyes as we mounted curbs with regular occurence, eventually arriving at our base in Mirabel after midnight for a well deserved lie down in our tents. 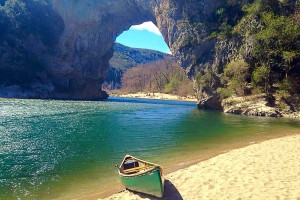 Day 1: Having met the rest our group: Matt Thompson (our leader), Jacqui, John, Rich and Jim, we loaded boats and with a mid-afternoon start, we headed for the put in and a short paddle on the Ardeche taking in the sights of the beautiful Pont D’Arc. I paddled solo. Marion and Alan went tandem. Strong winds through the gorge caused problems, we were all known to take of sailing at certain times in directions we had not planned on.

Day 2: With kit fully loaded, we set off for a 2 day 32km descent of the Ardeche gorge on continous Grade 2/3 moving water. Alan solo, Marian and I tandem. The scenery was breathtaking. Matt insisted we keep a look out for the Ardeche monkeys….we are still eagerly awaiting a sighting of them. Having completed half of the descent, we pulled in to a quiet beach and set up an overnight bivi, some in tents, most in hammocks. Following a beautiful sunset, having eaten, we headed back to the beach for a campfire and to listen to Matt’s stories of the Ardeche and his years of leading groups along the gorge. Unbeknown to Matt and Alan, Jacqui had gathered a small collection of rubber cockroaches and scorpions, which somehow made their way into their hammocks. Both gentlemen are still struggling to get over their experience. 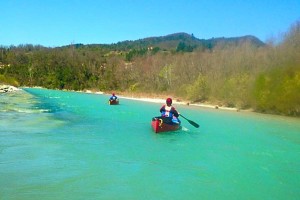 Day 3: Having packed up, we took to our boats again to complete the descent. More breathtaking scenery. This time, Marion solo, Alan and I tandem. We eddy hopped our way downstream, playing in whirlpools and examining siphons (known to claim up to 4 lives each year). We all took turns at leading sections and acting as Ardeche river guides by positioning our boats in front of siphons and caves to stop the rest of our group ending up in these dangerous spots. Alan and I almost swam whilst ‘protecting’ our group from an undercut rock. Further downstream we came up upon the rapid ‘Madeline’, basically a big rock mid flow with water flowing round both sides of it. Marion felt she would like to get up close and personal with this rock, dancing round it for some time before getting bored, taking on some water then showing off by paddling straight of it and into a nice eddy. 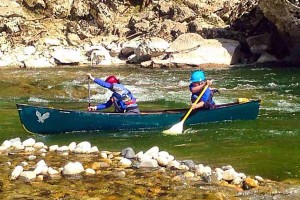 (Hopefully photographic evidence will follow in due course). About 8km from the end of the gorge we came to an 11m jump, which of course Alan had a go at. Closely followed by Jacqui. Well done guys…the rest of us cheered from the sidelines. From this point on we rafted our boats together and created a sail with another canoe. With wind on our backs, we completed the remainder of the descent and some Grade 1 rock gardens under sail, and in super quick time. With a 2.5hr wait for the shuttle, some of us had coffee, pints and a well deserved pizza before commencing a journey back to our original campsite. 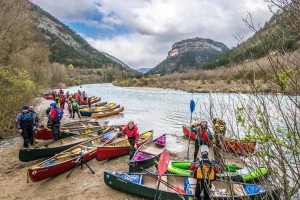 Day 4: Fully loaded, we headed a couple of hours North to the OCF Drome River Festival. On arrival, us 3 booked ourselves into a chalet for some home comforts. The rest of the group put up tents. Temperatures at night were by now dropping to below freezing due to clear skies. We didn’t half rub it in that we had lovely beds and central heating. Our group expanded in Drome to included the chuckle brothers Drys and Paul. We headed of the the river mid afternoon for a quick blast through the WWSR course. Lots of swimming, throw bags and good fun. We attended the opening ceremony and perhaps some of us consumed a little too much local wine…we were almost removed from the ceremony….OOPS!! 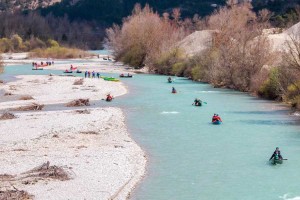 Day 5: We attended sessions run by Matt including lining, poling, tracking and some solo/tandem canoe skills sessions. I had planned to paddle solo, but ended up tandem with a beginner and had great fun making eddies and ferry gliding our way downstream. Marion and Alan paddled ahead with another paddler accompanying him downstream for an earlier finish. We then took to the dancefloor for a crazy night for beer, wine and dancing. Alan lost a certain piece of clothing….he might fill you all in…just ask him. 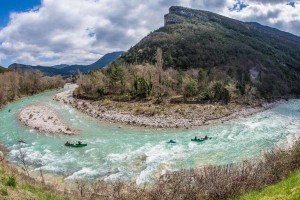 Day 6: The big descent of the Drome River. 32Km of constant grade 2 moving water with a couple of grade 3 sections. The start was chaos. Boats everywhere. One boat seriously pinned held up the descent for over 45mins. The boat did not live to tell the tale. I paddled with Marion, Matt with Alan. About 8km into the trip we stopped for a long coffee/lunch break to allow the crazy stream of boats to pass us by. I swapped with Alan for a paddle with Matt. I have never worked so hard in my life….we made every eddy possible, sometimes at the back of the group before shooting off to the front to lead certain sections. We paddled for about 20km without stopping. One guy who was tiring very quicky by this stage, took a couple of swims. Apart from this, a very uneventful trip for our 9 boats. A excited but tired bunch of paddlers returned to base that evening. 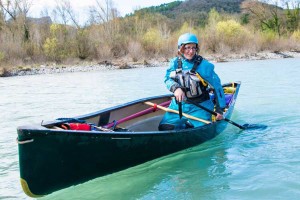 Day 7: Everyone had a well-deserved lie in, before a mid-afternoon peer paddle downstream to the next town. We tried out a range of boats….the ultimate for me being a solo royalex Swift Raven and a Bell. Both super responsive boats and high on my wishlist. We finished the evening with a group dinner and drinks.

Our last day: Packed up, goodbyes said. We jumped in the car and sadly headed for the airport. An amazing week had by all. We learned so much. Back again next year….everyone welcome. 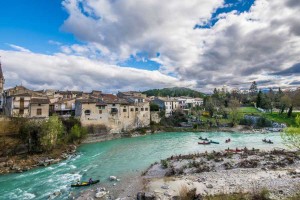 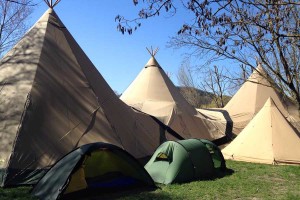