This year a contingent of paddlers from CCKA set off to complete (not so much compete) our first ever Liffey Descent! 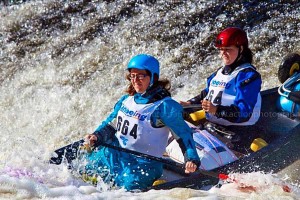 Of the start line and 800m to Straffan weir, all 3 Canadians successfully completed the drop following the tongue of water on river left just right of the fish boxes. Marion and I stopped to bail out having taken on a boatful of water. All 3 boats proceeded close together through the Jungle and off to Templemills weir where we passed Gareth stood in the water looking around for his partner Donna…competitive heads by this stage..we paddled on by…oops! 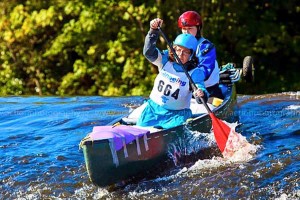 From this point on the 3 boats went their separate ways at their own pace, myself and Marion out front for the next few drops and across the long flat section of Leixlip lake to the portage where we were joined by Alan and Lydia. We paddled together for the next number of weirs, which were getting bigger and more complicated! Marion and I almost wiped out the rescue teams on Lucan…well they should have moved out of our way…we were racing after all!!

Next up..the Wrens nest, both boats missed the ‘v’ shoot, ending up having to take the easier run down river right. No incidents to report here, other than both boats requiring a bailing out! 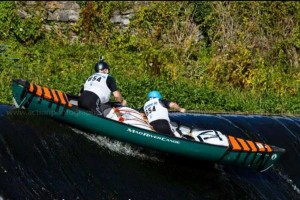 Then came Palmerstown, the biggest drop on the river, Alan and Lydia sailed through nicely. Followed by Marion and I, who under repeated instruction from the Marshall on entry to the ‘v’, insisted we paddle right of the large tongue of water, this resulted in us slipping down the side of the tongue and unceremoniously tipping me out on to my feet in a foot of water, and Marion on to her backside! Boat still upright we bailed out and continued on our way to the final weir at chapelizod, a nice wee shoot and on to the finish, 5 or so minutes behind Alan and Lydia. A short time after, in came Gareth and Donna, having also had a great trip on the Liffey. 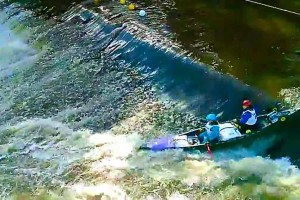 Marion and I thoroughly enjoyed our first ever Liffey Descent, but were somewhat unprepared for the seriously long flat sections. The weirs are great fun..and with careful line choices are very doable without swimming!

Advice to ourselves and those interested next year: paddle lots of flat water with your tandem partner and never stop paddling at any weir! A fantastic experience and highly recommended! Hope to see more club members there next year!!