CCKA club member, Hamish Wilkinson (19) has become the youngest ever kayaker to paddle around the island of Ireland. The 19-year-old, who is currently on a gap year, completed his expedition in Aug 2014. Paddling over 1200 miles, Hamish set off from Portrush on June 28.

“It’s good to be home,” said Hamish who lives on the outskirts of Castlerock. “I was paddling for 52 days, but actually away from home for 72 days – so it’s a bit odd to be back to normality,” told Hamish. The teenager elected to support two charities on his expedition – Greenpeace and Action Cancer, and so far he’s managed to raise £1,000. “I’m delighted with the total so far,” said Hamish. 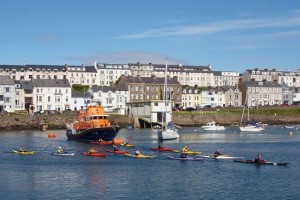 Hamish’s father, John runs local business Valkyrie Craft making traditional hand built wooden canoes and paddles, and the boat that Hamish travelled in was made by him and his father in just six weeks.

Not content with the challenge of paddling, Hamish was able to write a blog during his journey updating followers on his progress. His blog can be found at the following link: http://www.valkyriecraft.com/hamishroundireland.htm. Hamish’s blog provides a great insight into this voyage of discovery.  Although currently frustrated to be storm bound a previous post from 6th August shows how tough life has been on the Atlantic coastline ‘The plan today was to cross Lahinch bay and then paddle up the length of the Cliffs of Moher, cross to Inisheer and then up to Inishmore.  The forecast was for high force 4 winds from the west but as the day progressed the winds seemed to be coming fairly solidly from the north west.  With the sea swell over a meter or so, and some cresting and breaking, after I’d paddled a km or so along the cliff it seemed smarter to head directly for Inisheer, moving away from the cliffs to avoid the rebounding waves.’

A tracking device on the canoe enabled followers to find out Hamish’s exact location. Speaking about the journey Hamish said that the wildlife he saw along the journey will be something he will never forget. “I’m really pleased to get the expedition over and done with, I have plans for something else, but I just have to see how the bank balance is,” he joked. “I’m thinking maybe Iceland, but as yet nothing has been finalised. “I experienced some great sights along my journey, the views around Dingle were particularly good, but it is the wildlife that I met along the way that I will never forget. There were Porpoises, dolphins and basking sharks. To be so close to them on the open water was unforgettable. “They were as intrigued by me as I was by them, and I even managed to get a few photos.”

Arrival in Portrush was a few days later than planned due to bad weather, but Hamish recalled the moment his journey ended. “There was a fair few people waiting at Portrush Harbour on me, it was great that so many came out to welcome me home. “I wasn’t expecting so many. I have to say I was glad to see a coastline I recognised – that’s how I knew I was home.” 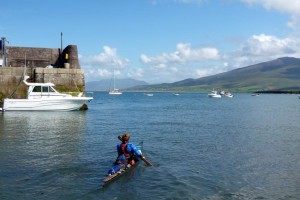 Taking some time out to rest, Hamish says he will start thinking about his next challenge in a few months time. Hamish also became the first to do the circumnavigation of Ireland in a traditional Greenland kayak with Greenland style paddle.  In a vote of confidence towards traditional techniques, Hamish built his craft with the assistance of his father John. Known as a ‘Selkie’ this kayak is wooden framed with a nylon skin and bar a few brass and bronze fittings there is no metal screws, fastenings or modern glues and adhesives. 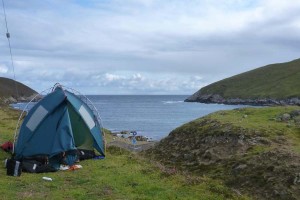 Hamish spent 70 days on this expedition paddling a total of 1600km or 1000 miles. He spent 3 days awaiting a tracker replacement and 3 days out for his sister’s wedding. In total he spent 64 days actually on expedition, 52 days on the water and a further 12 days on shore weather bound 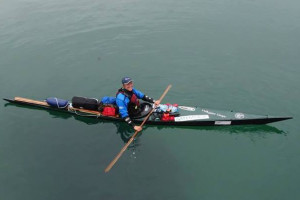 Hamish and the Selkie

If you are inspired by his adventure, Hamish was fundraising for Greenpeace and Action Cancer. If you would like to make a donation the please follow the links above. You can find a link to the CanoeNI.com who interviewed Hamish on his return.